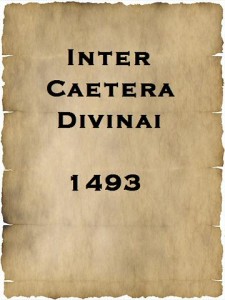 History writes that Columbus ‘discovered’ the Americas and the Indigenous peoples while in search for treasures for King Ferdinand and Queen Isabella, of Spain. Spain was part of the ‘mercantile‘ empires and strived for profit to the nation, moreso than settlement. They would gain control of mainland South America and also have colonies, in North America located in Florida, Mexico and California.

Upon this ‘discovery’ of the America’s, other European nations questioned Spain and the legalities, to make such claims of the America’s, due to the ‘potential‘ resources that would fall into control of Spain. A common practice in Europe, in regards to ‘discoveries of lands and resources’ was to seek out the advice of the Pope and have ‘Papal Bulls‘ awarding the state, these new lands.

Pope Alexander IV was the reigning head of Church in Spain. He is considered one of the most corrupt Popes yet admired for his diplomatic, political and administrative skills, for avoiding outright wars against the Church. As a graduate in law and rise through the ranks of Church, thanks to familial ties, along with gaining influence amongst his peers, he would learn to balance and take full advantage, of building the power base of his family, The Borgia’s, with his papal position.

The year of 1455, Pope Nicholas V had issued a Papal Bull called the ‘Romanus Pontifex‘ to Portugal, which awarded permissions to conquer and claim lands of Indigenous peoples NOT subjects of European Christian monarchs. Following this precedent, Pope Alexander IV met with lawyers and provided the Spanish monarchy, May 4, 1493, with their own Papal Bull, the Inter Caetera Divinai, which would declare the following:

‘The Pope could place non-Christian peoples under the tutelage and guardianship of the first Christian nation discovering their lands as long as those peoples were reported by the discovering Christian nation to be ‘well disposed to embrace the Christian faith‘.  ~ (‘Our Elders Understand Our Rights’, by Sharon Helen Venne)

The Inter Caetera Divinai papal bull, would lay the foundations, and be applied to all Indigenous peoples, for the next 500 + years. It would be followed by many European nations to treat the Indigenous peoples, as ‘objects’ rather than as human beings. This papal bull would justify the rationale, that non-Christians could not own lands when faced with Christian sovereigns.

European colonizers would relocate, displace and strip lands from the Indigenous peoples and deny them rights, to govern themselves. It would become the ‘Doctrine of Discovery’ which would prevent recognition of the Indigenous peoples as ‘Nations’ and be used to make ‘racist laws’, such as a few of the following, practiced in the United States:

Canada would also enact laws, that were not favorable for their Indigenous peoples and can be found under the Indian Act (IA), 1876, but other laws were also created, to control immigration of the Chinese. They would get some relief after their support in WWII. Canadian Aboriginals would continue to suffer with laws designed to continue removing lands and rights even after they had also served in WWII. A few of these laws are as follows:

Today, the Doctrine of Discovery (adopted in 1823, and) remains part of US laws, as implemented in the Johnson v. McIntosh or the recent Sherrill v. Oneida Indian Nation (2005) court decisions. Efforts, by Aboriginals in both USA and Canada along with the Episcopal Church (US and Canada), have been made to request the Pope and Queen of Britain, to revoke the Inter Caetera Divinai papal bull, but recieve no co-operation. It has been considered ‘not juridically valid‘ but remains in existence therefore still endangering Indigenous peoples around the world.

Society is said to be continuously evolving for a better world. This can be seen with the co-operation between nations (United Nations) and use of diplomacy along with a rise of human rights. Yet, this particular document, the Inter Caetera Divinai, continues to allow, for continued acts of atrocities and inhumanity, against Indigenous Peoples, right in their own homelands, globally. Do you believe that God blesses those who commit crimes against others?

I hope you found this article informative. Please feel free to leave your comments and share your own observations or experiences. Use the ‘Contact’ form to make a request on a topic of your own interest. It is FREE to subscribe by email or RSS feed.

Article(C)2009 An Informal Cornr, all rights reserved. Ginsense writes articles on business skills, development, health, science, technology and society and enjoys advocating for independence, security and a better world for all of us. 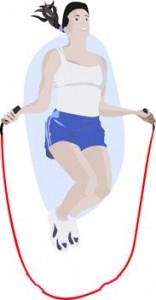 The days recalling our youth and childhood, brings nostalgic memories of those times when we were footloose and fancy free. Life held mysteries and dread, that beckoned us to step a little closer and dare to seek out the answers, or run as quickly as possible, back home. Which ever choice you made, it required us to move our bodies. Those were days when our energy levels seemed to be unbearable to contain, and moving whether running, skipping, skating, sledding, was fun! So, what the hey happened that has stopped you?

Days of high school were spent worrying about what others were thinking of us, or learned to care not an iota, about their opinion. Some had greater worries, bad homes, unstable lives, next to the piles of homework our teachers heaped on us every night. It was a struggle or battle, to juggle our worries with so many demands dependent on each environment. Yet, some may have managed to be part of their school’s extracurricular activities such as being part of sports, music or hobby teams. Some teens still got to mix fun, into their daily routines.

Recent news stories has stated that North Americans have quite high levels of obesity. Parents really should take note to observe their family’s over all activities. There may be quite a few latch-key children that parents prefer to be home or some may allow their child(ren) to be part of their school’s extracurricular activies. Todays society does require parents, ensure the safety and security of their child(ren).

Parents can still provide activities for their children to learn and maintain their health, together. I would highly recommend sitting down together and having a discussion, about long term health and importance of staying active. Brainstorm idea’s together, which can be applied. It can start with taking a drive to the nearest park in winters and tobogganing, going out skating, hiking through a national park, swimming at the local public pool, biking through the neighborhood.

The simplest of activities that are great can be walking and dancing. One can add investing in small dumbbells, a skipping rope, and even ankle weights. It’s said that the amount of calories you take in with eating should equal the amount of calories you burn. A little online research will reveal just how many calories we consume with our diets, as there is a lot of information available. Note the following chart in regards to calories that can be burned with walking at a comfortable pace of 2 m/hr.

Now, let’s take a look at hiking and how many calories can be burned not to forget, it’s fun! This is only for cross country. A hilly landscape would burn more. Just bring along your camera, some water and dress appropriately. Good footwear is important and pay attention to your local weather report.

I also have to add here that you can still accomplish the numbers of calorie burning with whatever method you choose. If you split the 30 minutes into two, you have 15 minutes one direction and return trip home, will give you that 30 minutes. A straight 30 minutes one way and another 30 minutes return home will double your number. Got to keep the math in mind.

The following chart reveals just how many calories is burned with my own various exercise activities. Note that they are a MIX of activities. I stand at 5’8 and my weight ranges from 145 – 155 lbs. It doesn’t include my running up and down the stairs with ankle weights and totally missed including the jumping rope exercise. I don’t even do these exercises all at once but only in five minute intervals (except my canoe outings!) throughout my day, since I do work and have parental responsibilities too. A life of leisure sounds great but I get bored too easily.

Diet plays a large part here too. I eat a lot of foods that many, including my own sons, is considered, too healthy. They run away to their extended families some days, yes but I do cook meals they love also. The following chart shows the calories of some of the foods that my own diet provides.

Moderation is said to be KEY to maintaining one’s weight with diet. As you can see with the above chart, I don’t totally stay away from ‘bad’ foods. I get my cravings too especially for chocolate. One just has to learn to mix the healthy foods into their diet and practice self-discipline with the ‘bad’ foods then balance it with exercise.

I do this due to a heart defect and recent diagnosis of pre-diabetes. Between my diet and exercise, I get great reports from my doctor. It can be a struggle but at least once you learn, healthy practices can become habit which your children will greatly benefit, for the rest of their lives. So, how healthy do you want to get?

I hope you found this article informative. Please feel free to leave your comments and share your own observations or experiences. Use the ‘Contact’ form to suggest a topic of your own interest. It is FREE to subscribe by email or RSS feed.

Article(C)2013 An Informal Cornr, all rights reserved. Ginsense writes articles on business skills, development, health, science, technology and society and enjoys advocating for independence, security and a better world for all of us.

A great #Gift for the visually impaired. Order today!