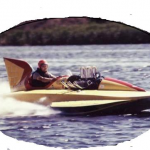 The contest of speed can be found in many sports such as running, driving, sailing, riding, etc. This includes the world of boats. There are risks involved when participating directly in these types of races but a regulatory organization can usually be found, and strict safety measures in place. Can you imagine being a pilot in a high speed boat race?

Hydrodynamic ‘lift‘ increases when the speed of a hydroplane increases.. Water is used for lift, propulsion and steering, rather than for buoyancy. A high speed boat used in the ‘Inboard circuits‘ refers to hydroplanes that race on inland waters such as lakes and rivers. These are usually built as a light speedboat with a shaped bottom which helps lifts the hull out of the water at high speeds.

A few shared features found on hydroplanes, is their ‘flat run aft‘. This refers to the near flat hull that runs in a near straight line from front to back (aft to stern) of the boat. The shape of the hull will cause the water into a ‘downward‘ flow creating an upward force, and mixed with speed, causes the vessel to ‘plane‘. Most hydroplanes will have short ‘wings‘ called ‘sponsons‘ which uses the science of hydrodynamics, and helps the boat stay stabilized during ‘take off and landing‘. Sponsons are considered a main element in the over all design of this particular boat.

A second detail that can be found, is an adjustable ‘canard‘ wing which is placed between the sponsons. This helps raise and lower the sponsons in/out of the water for easier maneuverability with controlling speed and turning corners. Most boats are built as ‘3 Point’ design meaning only 3 sections touch the water and this refers to the rear of the sponsons and propellor. Boat designers have learned that the less resistance in water attained meant more speed.

Other boats may use a hydrofoil design similar to an ‘air foil‘, which refers to ‘any surface that’s designed to help lift or control an air craft‘ and usually attached beneath the hull, which also helps lift the boat out of the water, when it’s moving forward, and helps reduce hull ‘drag‘. These can be quite expensive to have added to one’s boat.

A noise factor occurs when attending a Grand Prix race car event and this can also be found when attending a hydroplane race. This is due to the engine designs used ranging from actual airplane engines to ordinary car engines and usually all liquid cooled V-12 engines. This noise factor earned hydroplanes the nick name of ‘Thunderboats‘ and ‘Dinoboats‘. Today, some engines have incorporated the use of helicoptor engines. These particular types of engines help the hydroplane easily enter the ‘planing‘ realm and apply the ‘power-to-weight‘ ratio to gain acceleration from velocity of their boat and overcome the forces of gravity and drag.

Turbine engines from airplanes and helicoptors are favored and used in building these particular race boats. These engines basic function is bring air into the engine, through a compressor and increase up to 3-12 times, it’s original pressure. This helps propel the hydroplane with speeds up to 200 mph and still standing, record breaking speed, of 288.6 mph, by Ken Warby.

A hydroplane racing event usually provides a course, that has the boats running in an oval shape for 4-6 laps around. Food and gift vendors, music, along with beer gardens are available next to regular business sections of the hosting township. Spectators can meet with boat crews, the pilot and viewings of boats. Some may even get opportunities to ride in one of the speed boats. Seating of spectators is provided for the most optimum viewing.

The early beginnings of hydroplane racing had high fatalities of the driver aka the ‘pilot‘. Today, there is a process that must be followed that ‘builds the skills and experience‘ of a new driver, slowly, and assure that knowledge of all rules and regulations is in place. This is to help protect the life of the pilot though accidents cannot be foreseen and risk is known. People still enter these races hoping to break records, win titles, enjoy the camarderie of a team, enjoy the over all thrill of driving an extreme speed boat.

Check around your area to see if you have a Hydroplane race coming up or where your nearest one is being hosted. Experience a race that’s far different, though somewhat similar, from a car race. One that’s on water rather than tarmac. You may think you’ve gone to a car race till you see those boats flying across the water.

I hope you enjoyed this article. Please feel free to share your comments and/or observations. Use the ‘Ask a Question‘ form to make your own requests on a topic of interest.